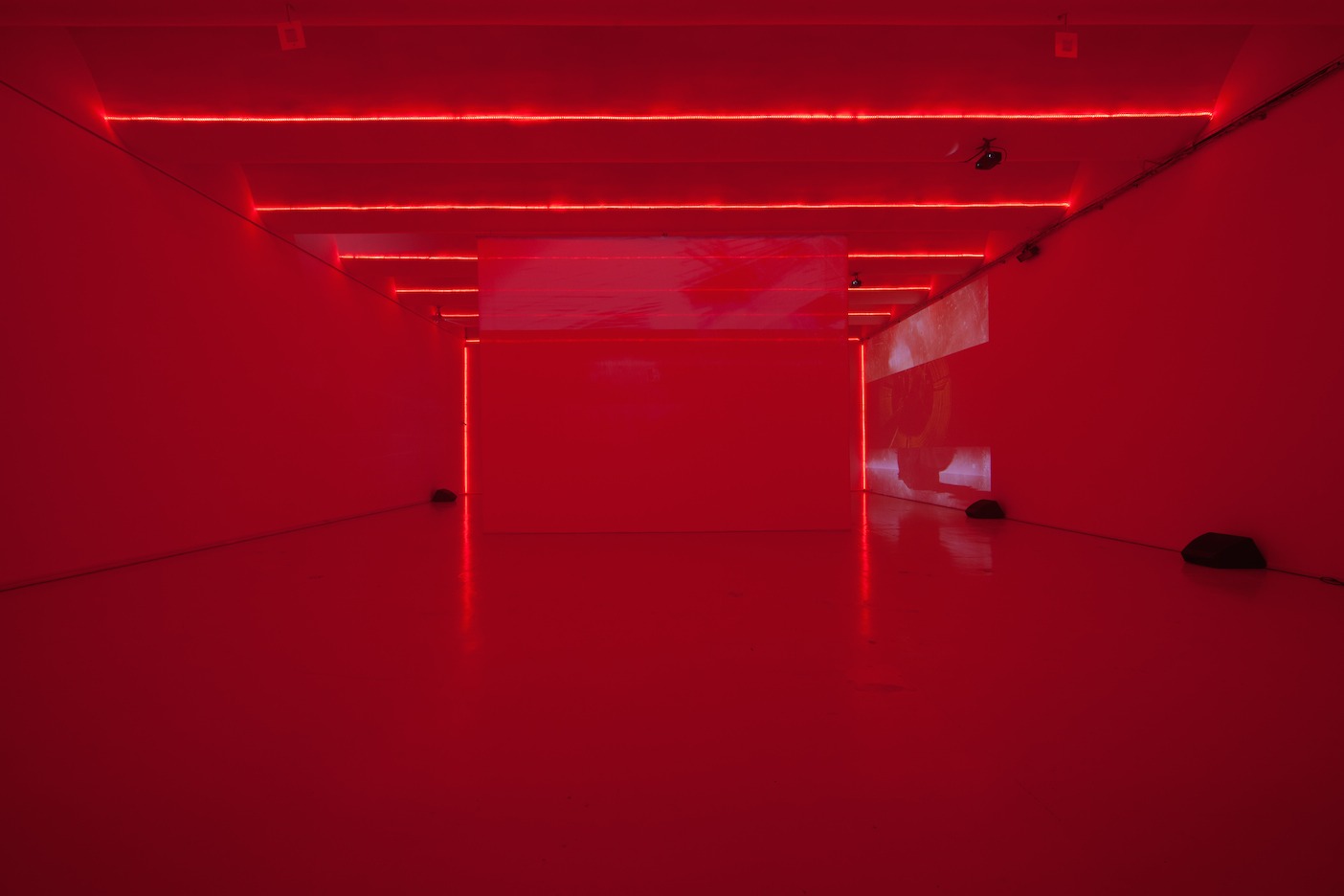 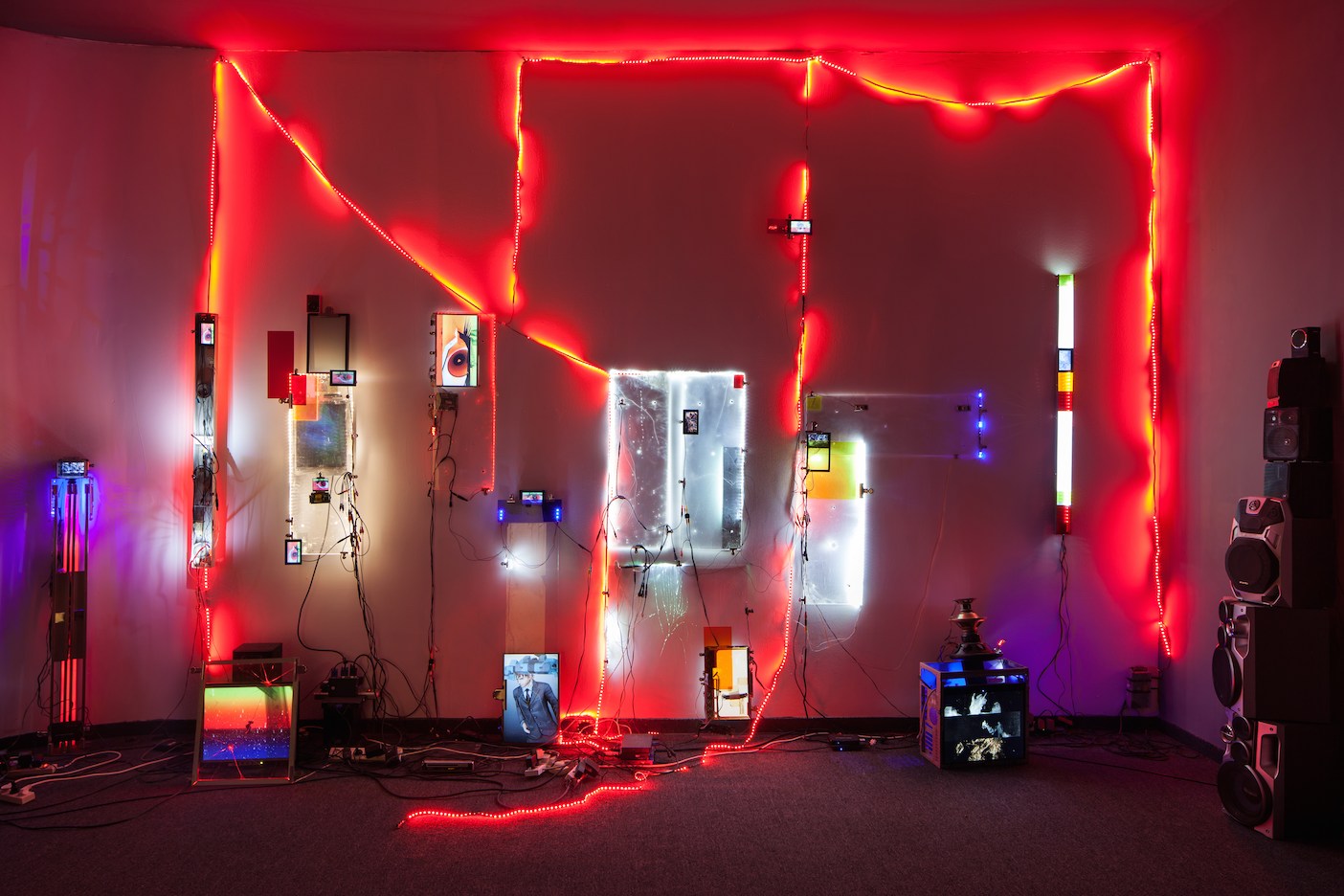 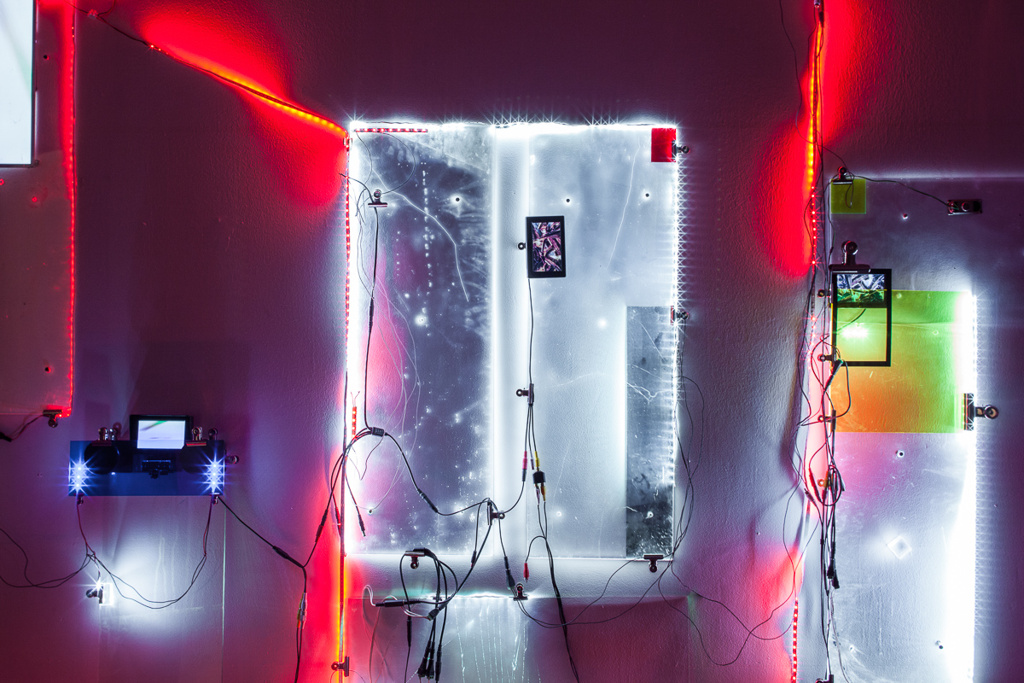 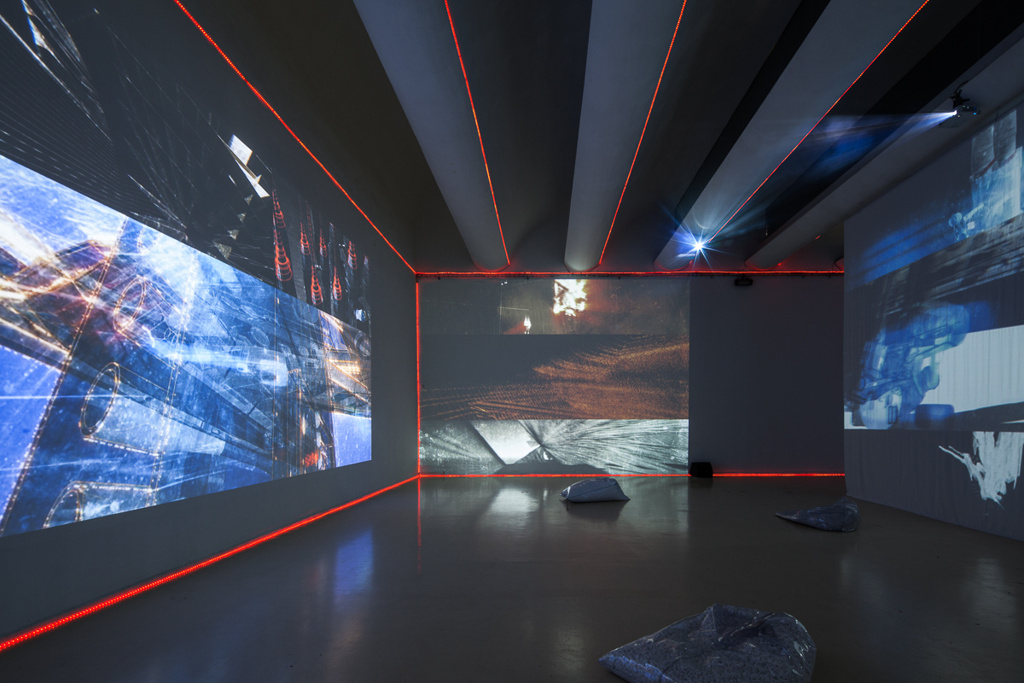 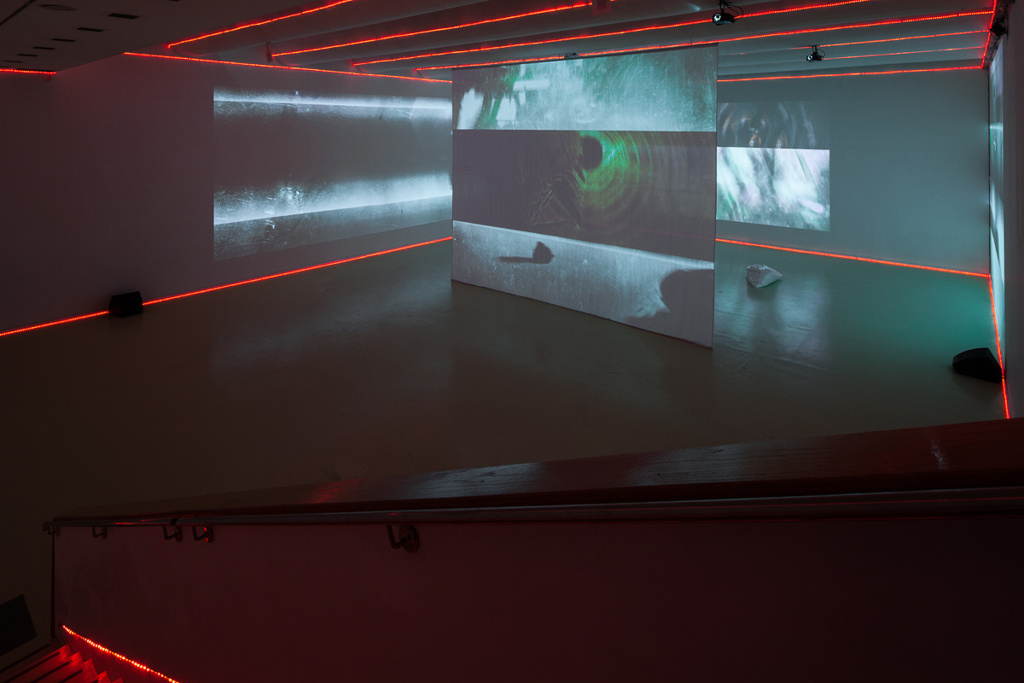 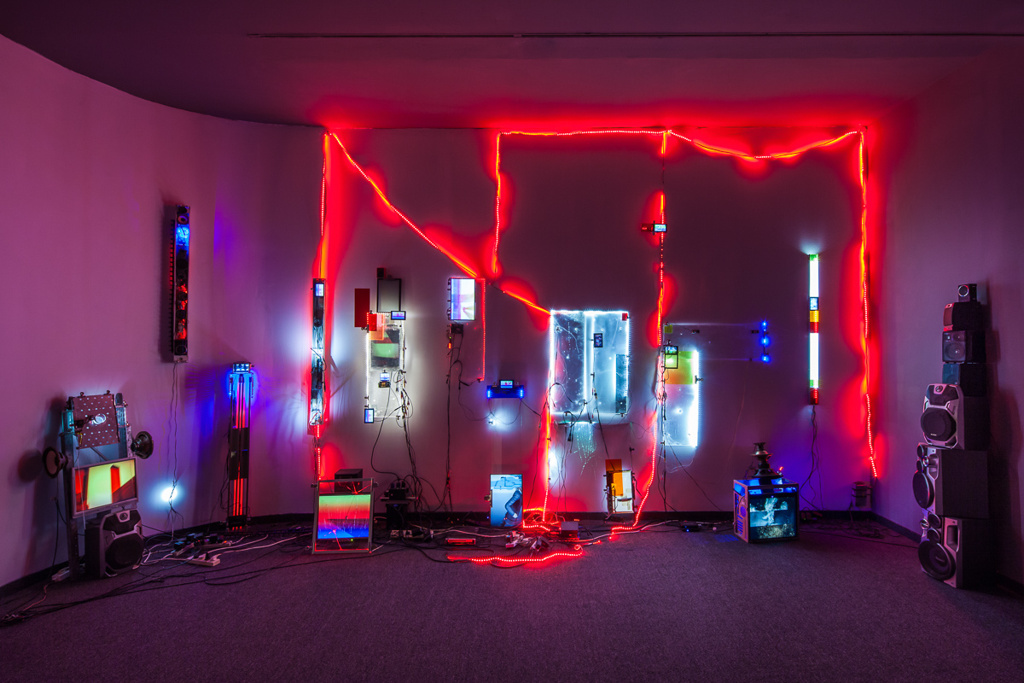 Photos above by Tal Nisim 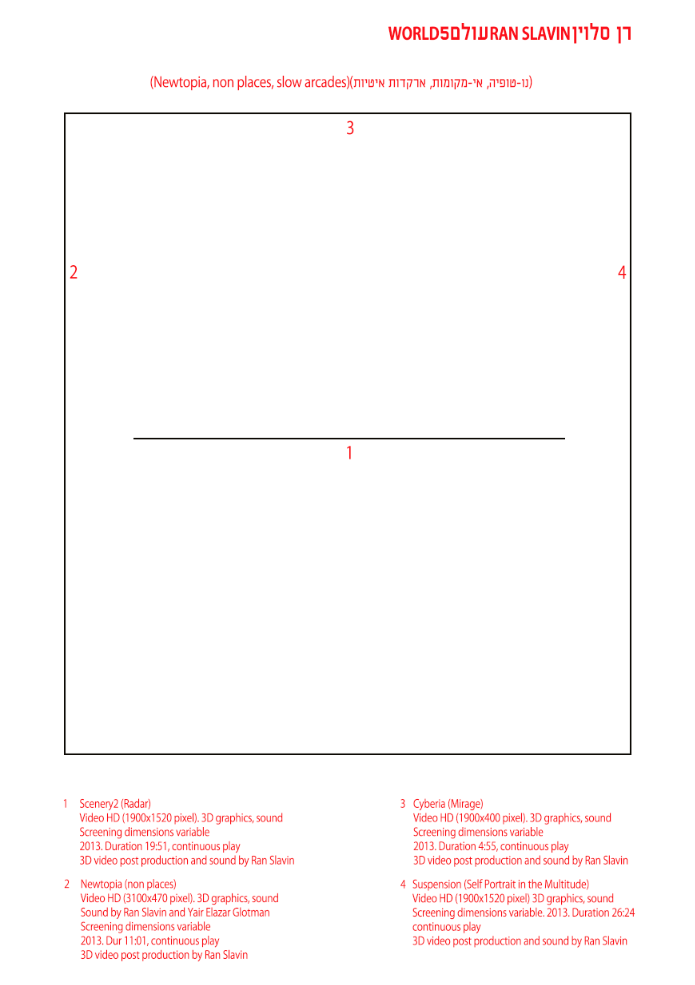 Ran Slavin’s video installation at the Haifa Museum of Art is comprised of a number of video sources, electronic, digital, sound, and light objects (the work’s first version was shown at the Herzliya Museum of Contemporary Art earlier this year). Together they combine and form a fragmented installment occurring intensively, simultaneously, and repetitively, in a number of locations. The project reflects a technologically, culturally, ethically, and aesthetically complex portrait of the present with respect to time, place, and space. Slavin works with layered digital 3-D animation, reflecting on the experience of our disconnection from natural time. He proposes a technological space and time capsule as a sensorial space, reflecting the virtual-digital age.
The project’s title echoes the common categorization of the world’s countries into “first,” “second,” and “third worlds,” according to parameters such as regime, economy, and technological progress. World 5, Version 2 is a virtual world no longer dependent on representational or photographic strategies. In it, time deviates from the natural order and is no longer dependent on the orbits of the sun and Earth, which determine a 24 hours per day cycle divided hours into light and dark. This world is a binary, uninterrupted one. Multi-screen, fragmented, electricity-dependent, and characterized by technological excess and information. It is spread out in arrays of screens, projections, sound and light objects creating a multi-screen heterotopic arrangement with winding nets, exposed electrical bearings, computerized graphics, light strips and electronic units attached to each other provisionally, with office paper clips.
World 5, Version 2 proposes a contemplation of a flickering, ever-changing space with awe and enchantment. Three -dimensional images of mechanical bodies and ancient landscapes interspersed with abstract multi-layered digital models are placed in landscapes recalling science fiction and virtual aesthetics. This world offers different parallel possibilities, for which there is no structured “proper” course of viewing or understanding. It is a simultaneous, hybrid utopian world, characterized by movement between the physical and the digital with no beginning, middle or end, between electronic music and temporal light scapes. 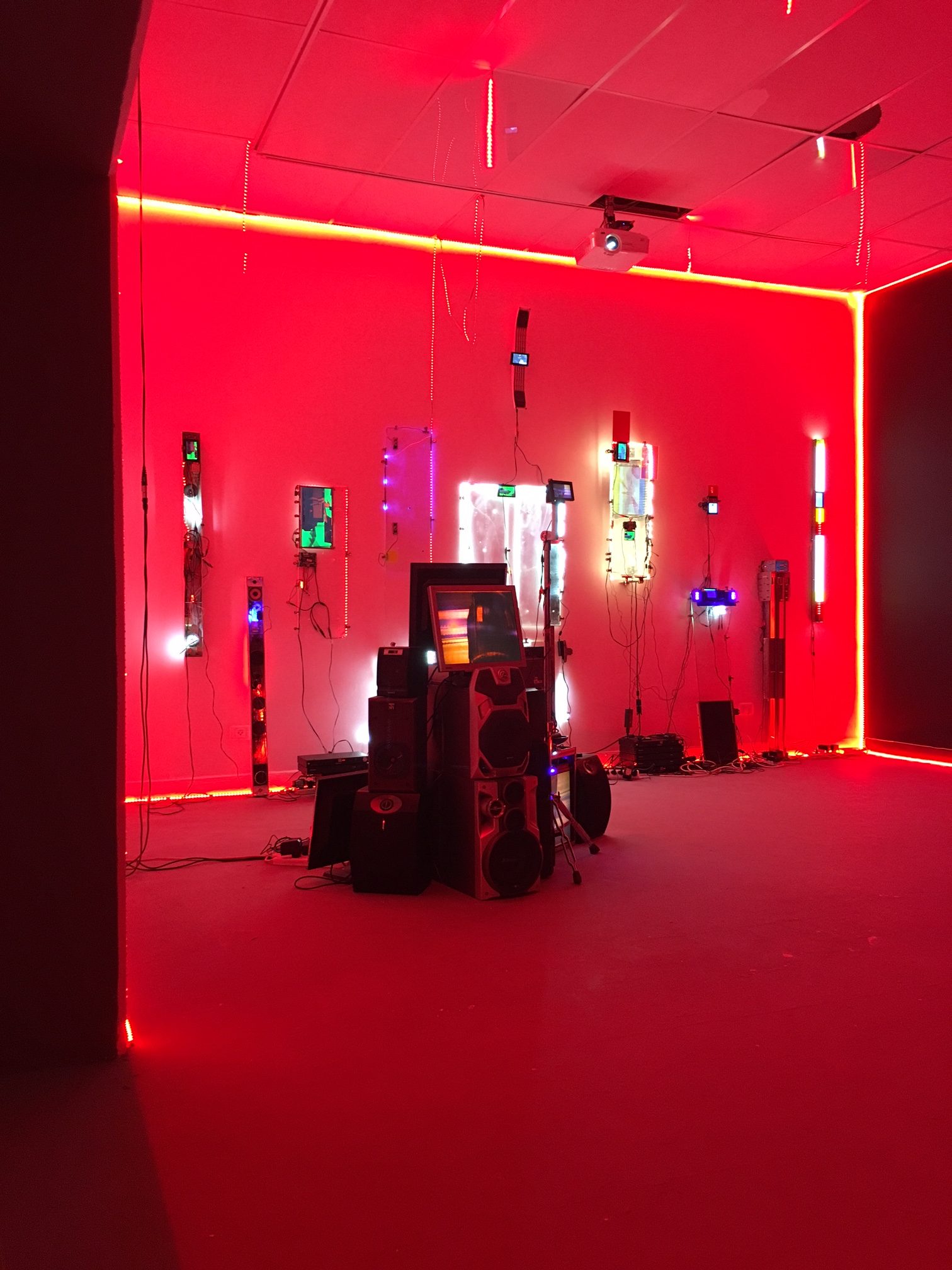 Suspension (Self Portrait in the Multitude) 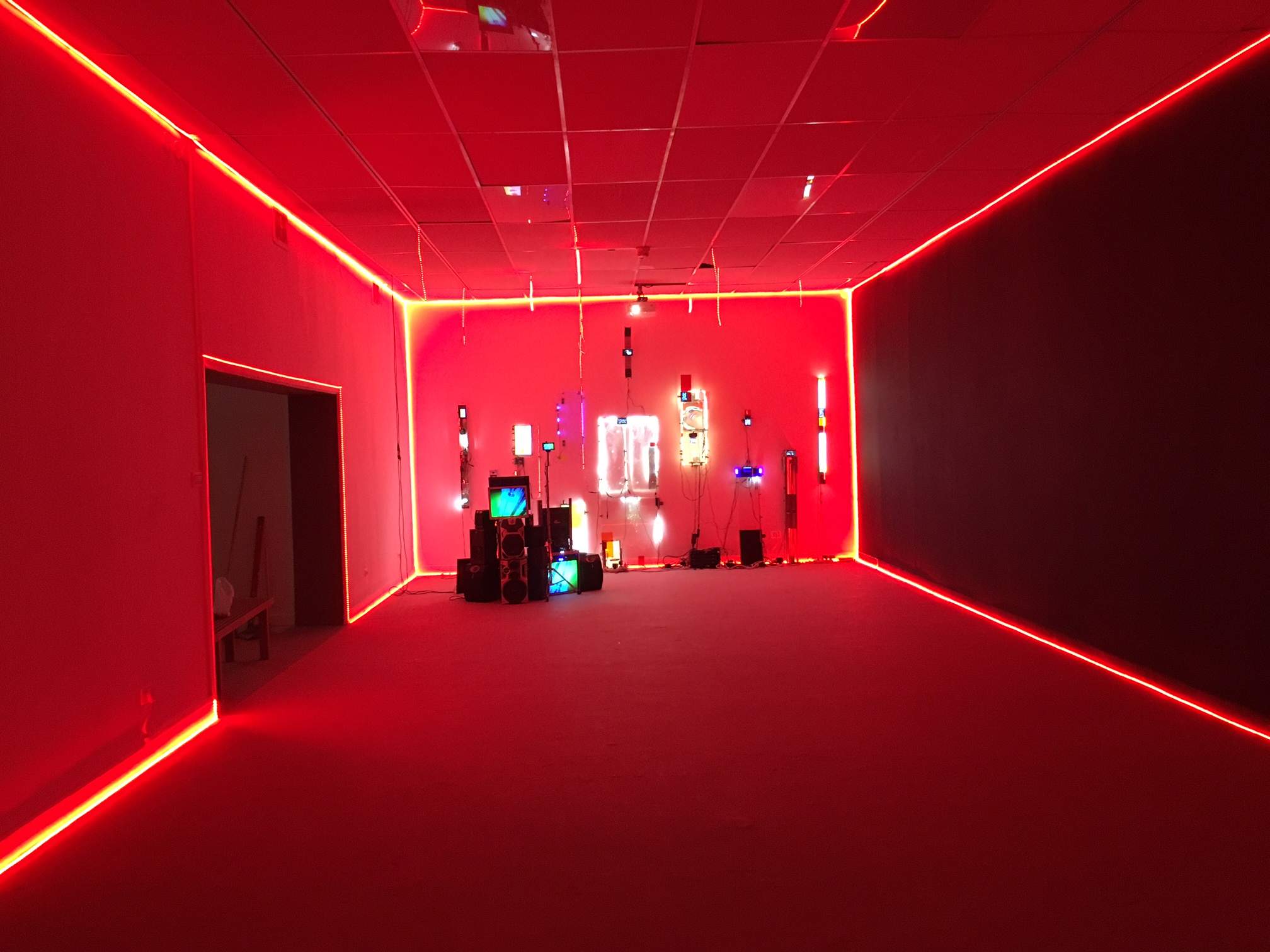 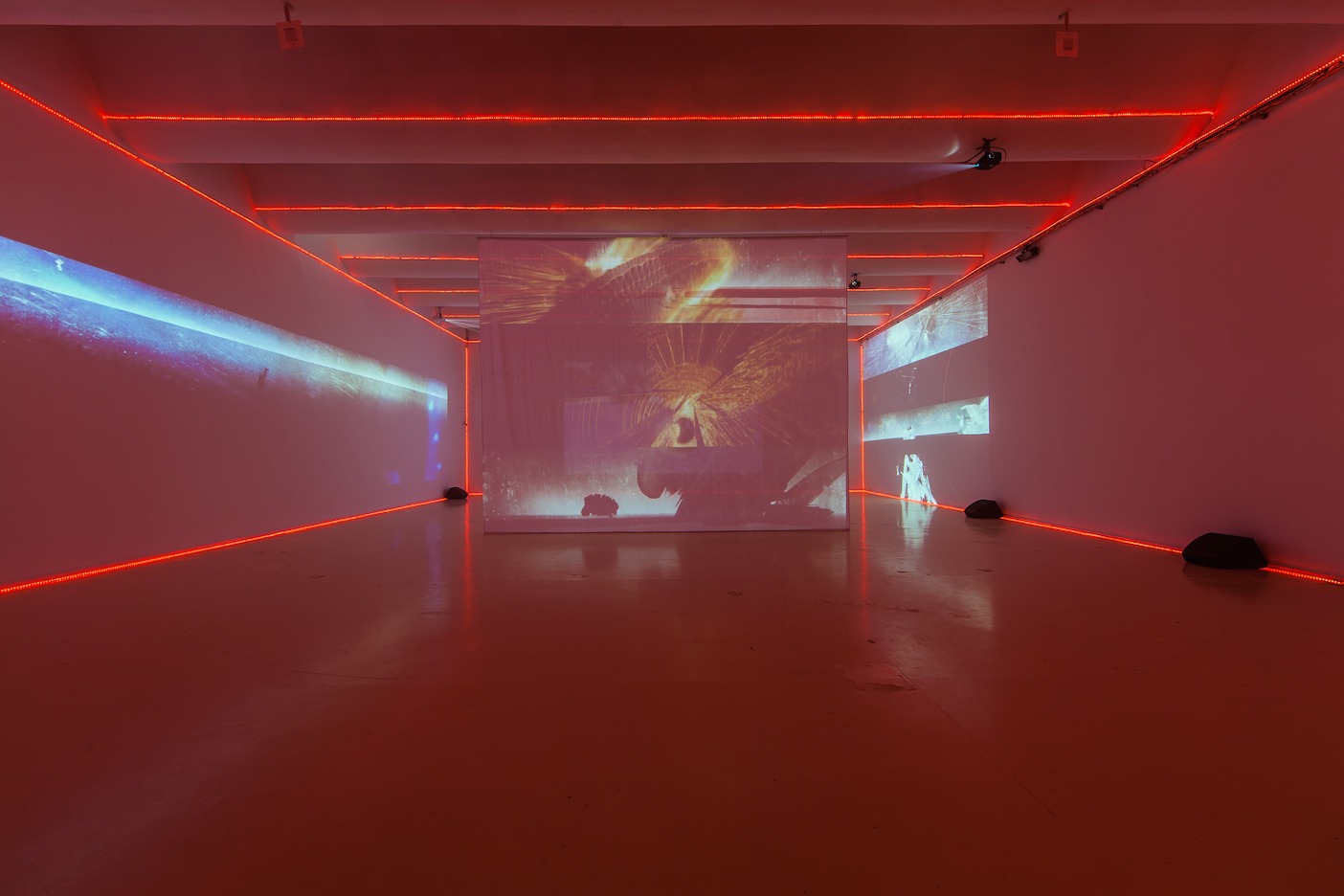 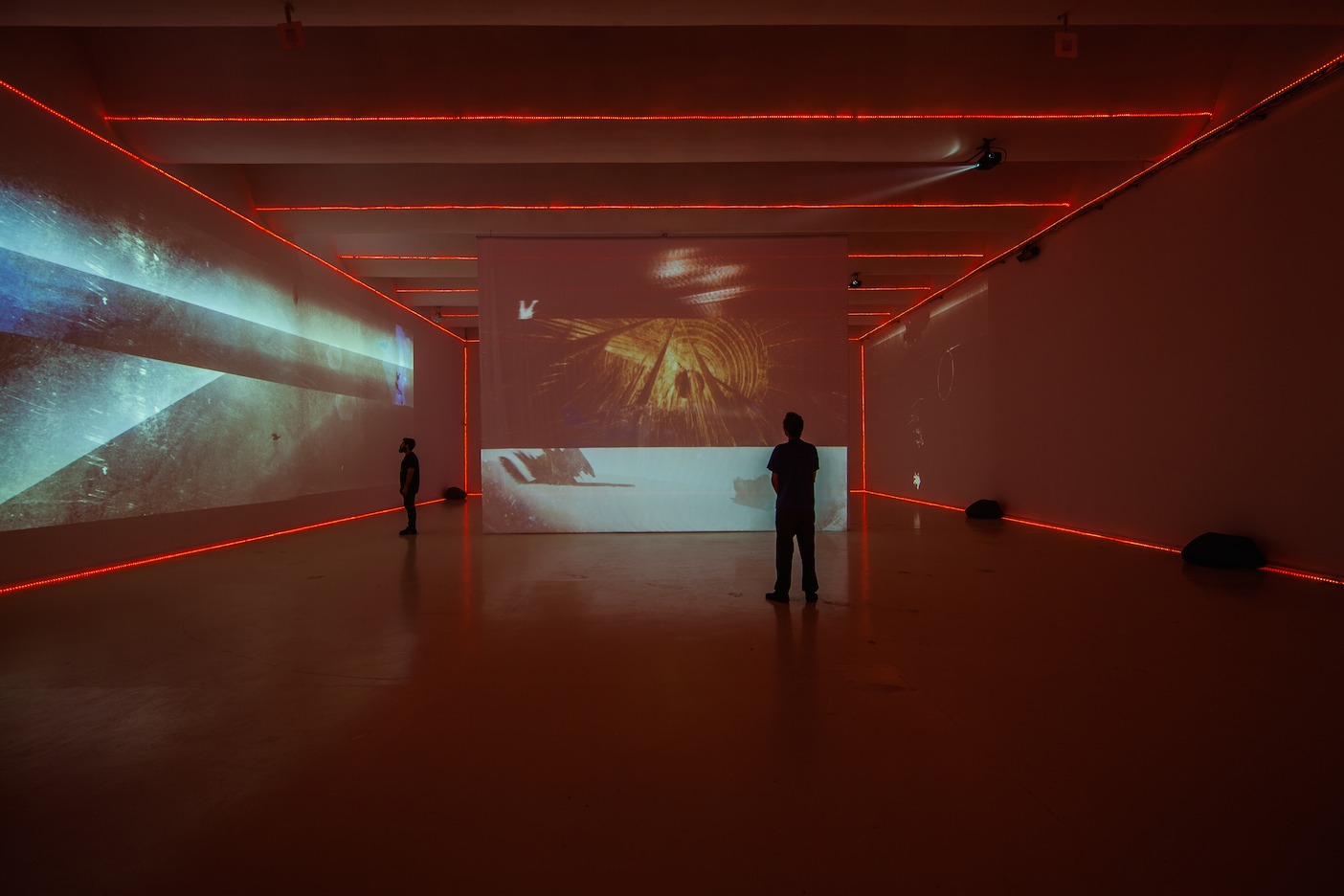 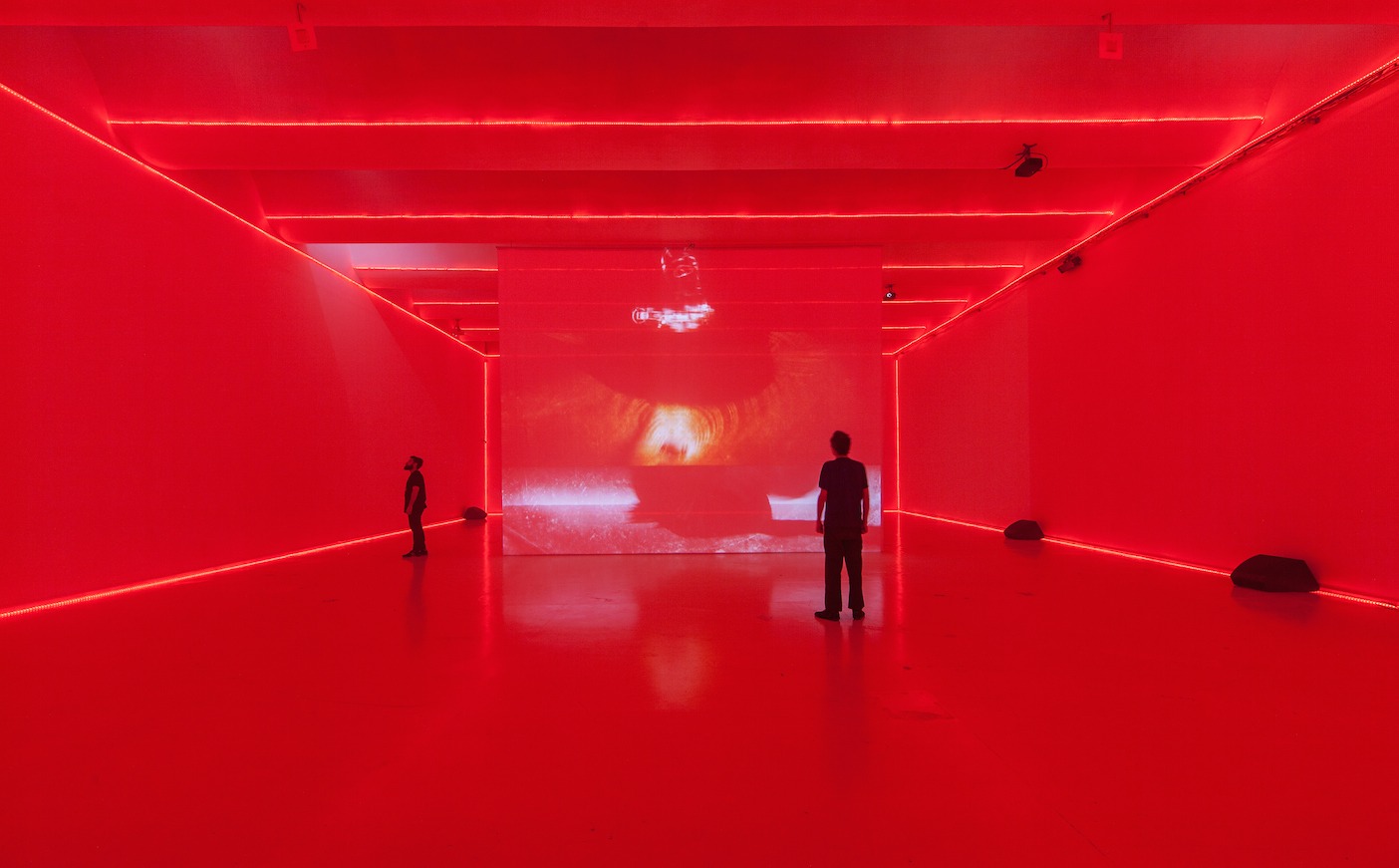 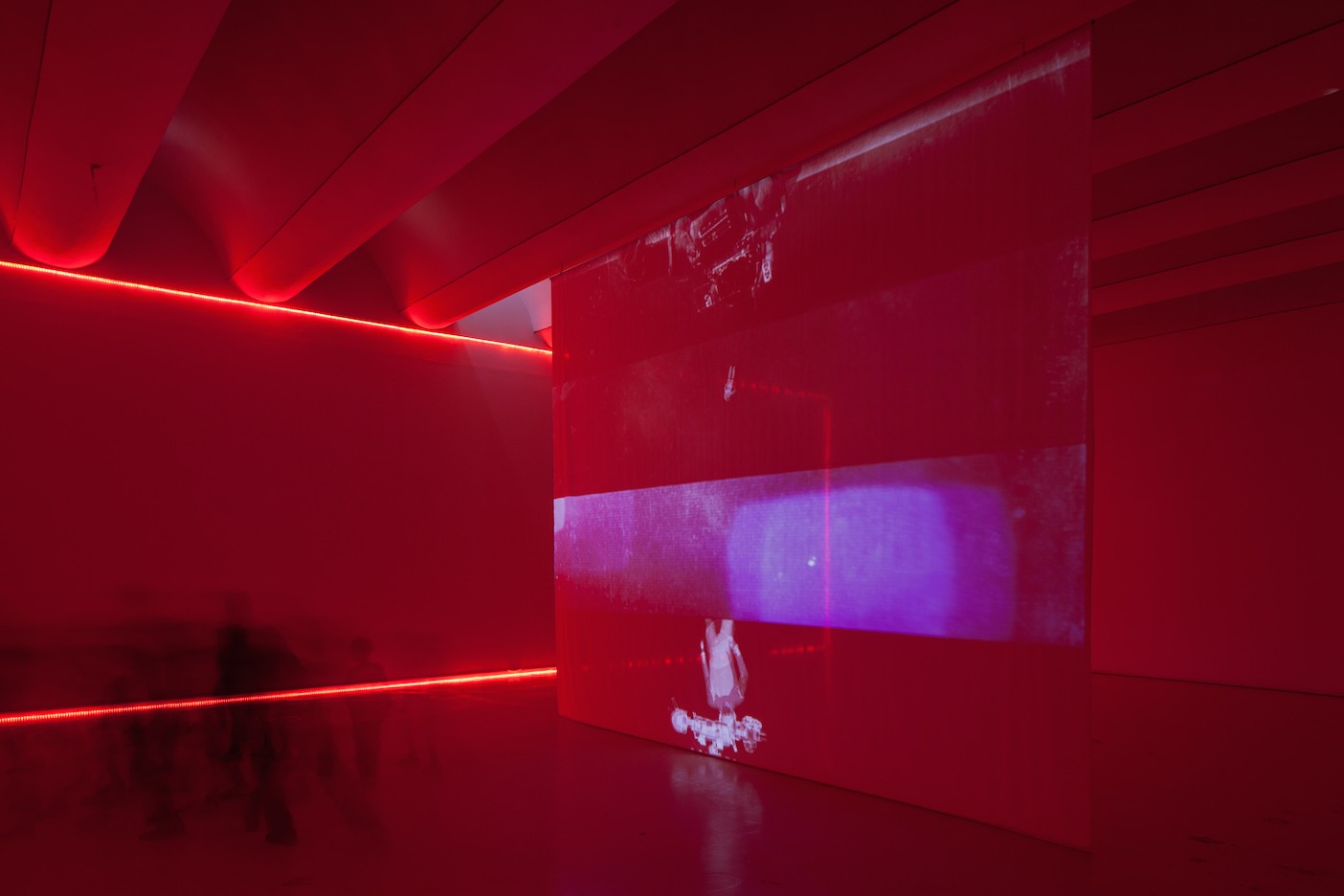 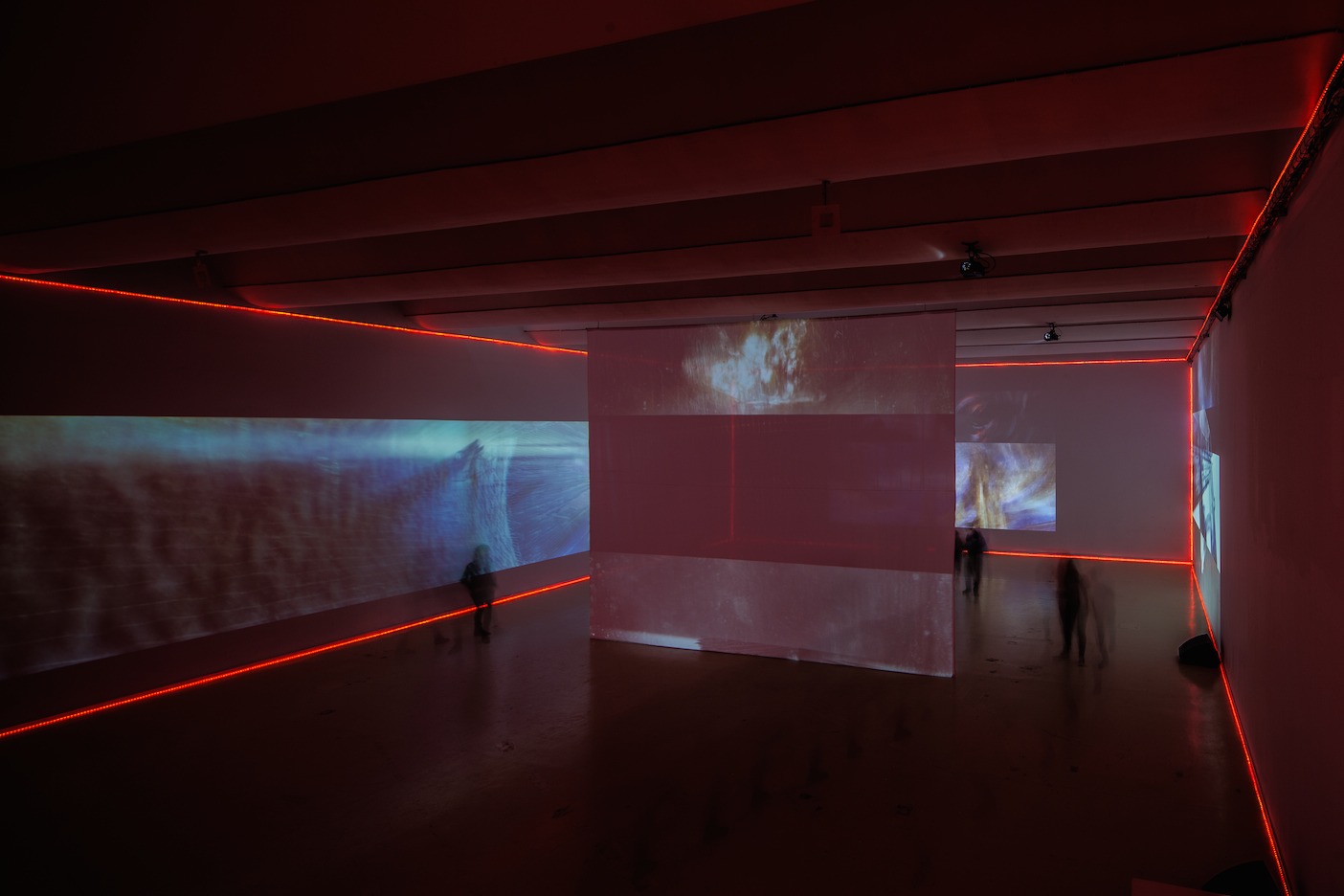 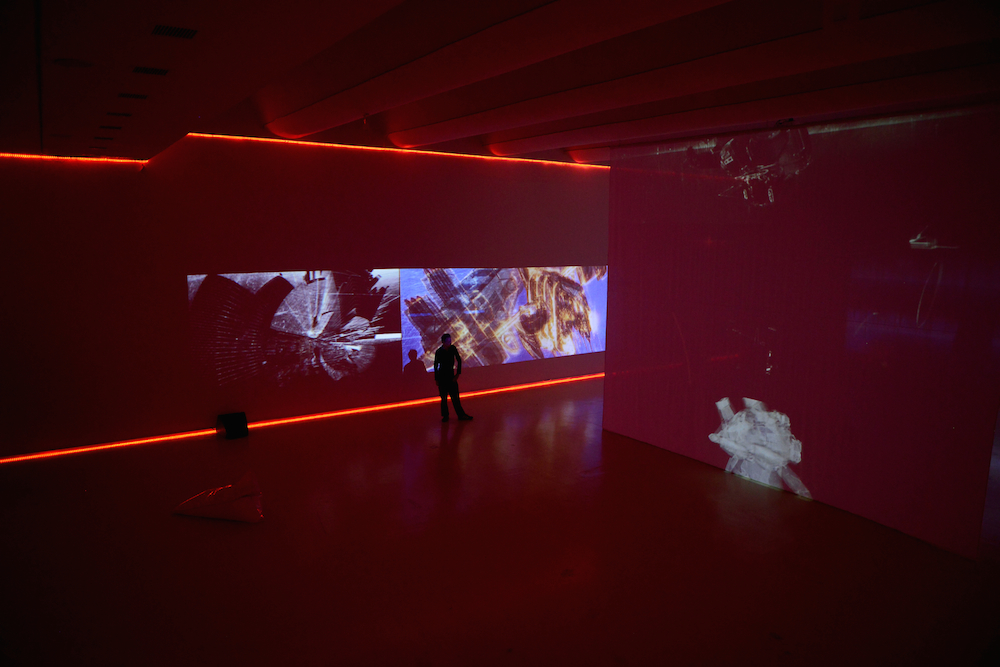