A dream noir video shot in Allenby Street in Tel Aviv (named after General Edmund Allenby) focusing on a haunted atmosphere, a whilwind of a psychologiacal moment, where a vandalized image in a bus stop sign, hooded mannequins in a shop window across and 2 passer bys are the protagonists.

Allenby Moment focuses on a hallucinogenic memory of a place. A spiral into a moment in time. As though the ‘place’ – Allenby street in Tel Aviv, could resonate its own dark ethereal memory of a bad moment that took place there in time. The only witnesses are the temporal silent mannequins in a store front and a graffiti washed poster at a bus stop. This surreal twilight reminds me of the strange stillness found in a Giorgio de Chirico’s painting. 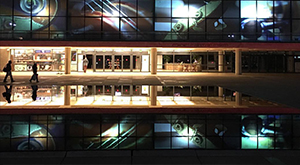